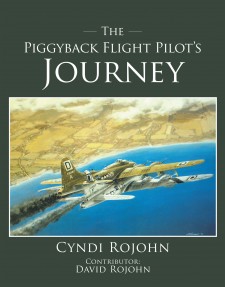 MCKEESPORT, Pa., January 30, 2019 (Newswire.com) - Cyndi Rojohn has completed her most recent book “The Piggyback Flight Pilot's Journey”:  an incredible and harrowing account of the legendary Piggyback Flight, a display of airmanship and skill during the second World War that saved lives and became the very picture of selflessness and discipline.

Published by Fulton Books, Cyndi Rojohn’s book discusses the truly amazing journey and selfless actions of Glenn H. Rojohn and William Leek as they worked together to keep two conjoined B-17s in the air on the final day of December 1944. Their skill and quick thinking saved countless lives and became an example for young pilots still valued today.

Legendary World War II 100th Bomb Group B-17 bomber pilot Glenn Rojohn defied the odds December 31, 1944.  Due to circumstances beyond his control, he and his co-pilot flew two conjoined B-17s and lived to tell the story.

The Piggyback Flight Pilot's Journey is told through his rare 260 image collection saved by his mother starting the day he decided to serve his country. The collection includes training logs, journals, and pictures.  Mission logs with coordinating pictures and letters help to tell the crew's story. The Piggyback Flight mission is described by witness statements and documents that are provided. Glenn's POW Diary and letters are also included for readers.

A letter sent to Glenn sent him on another mission to reunite with his crew. He spent much of his life reuniting with crew and witnesses from America and Germany which is documented for readers. His journey came to an end when he was inducted in The Soldiers and Sailors Hall of Valor in Pittsburgh for his bravery and commitment to his World War II service.

Readers who wish to experience this inspirational work can purchase “The Piggyback Flight Pilot's Journey” at bookstores everywhere, or online at the Apple iTunes store, Amazon, Google Play or Barnes and Noble.