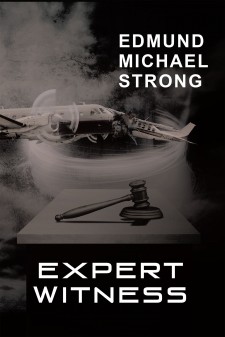 ST. JAMES CITY, Fla., June 10, 2020 (Newswire.com) - Ed Strong's Novel "Expert Witness" reveals the government's attempt to cover up the true cause of a midair collision between two aircraft under air traffic control's jurisdiction by falsifying documents, altering recorded air traffic control communications, and destroying the credibility of the plaintiff's expert witness. He weaves an engaging tapestry of twisting plots in this engrossing thriller.

The back cover says it all:

"Forget what you've seen in all the high-gloss airport movies. Enter the unvarnished world of air traffic control, aircraft accident investigation, and government cover-ups. A world where courtrooms are used to distort facts and oaths to tell the truth have no meaning, where witnesses are manipulated and the stakes of winning and losing are destroyed careers and multimillion-dollar rewards."

Michael Edmunds, an expert witness in air traffic control, takes on the case of his life when a private aircraft and a commuter airliner operating under radar control and assigned different altitudes collide in the rain-soaked night skies over Upstate New York. The normal investigation and legal process are accelerated by a U.S. senator whose wife died in the crash. High-powered government officials attempt to cover up mistakes, recorded transmissions are altered, and evidence is destroyed. Edmunds discovers that not only does he have to deal with a bureaucracy bent on discrediting him but will also be working with two inexperienced lawyers with different agendas, one of whom turns out to be his ex-fiancée from the distant past. Their breakup was less than cordial to say the least.

Please direct all media inquiries to Gregory Reeves via email at gregory@fultonbooks.com or via telephone at 877-210-0816