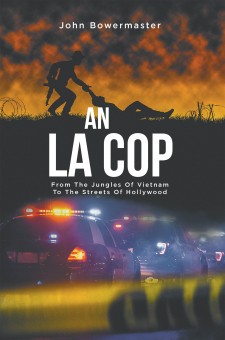 PORT CHARLOTTE, Fla., September 16, 2020 (Newswire.com) - John Bowermaster, a Vietnam combat veteran and a LA cop, has completed his most recent book “An LA Cop: From The Jungles Of Vietnam To The Streets Of Hollywood”: a gripping and potent life journey of a soldier across the many combats and plights inside warzones.

John writes, “Vietnam, April 15, 1969. At first light, the air over Firebase Diamond III was full of dust from four hours of incoming artillery shells exploding around the perimeter. Alpha and Delta companies fought for their lives during the ground attack. The air was thick with the smell of napalm from the jet airstrikes. The men sat behind their bunkers, staring blankly across the open rice paddies looking for remnants of the two battalions of NVA soldiers that hurled themselves at the firebase. The men would remember and talk about this fight for the rest of their lives.

"Los Angeles, May 17, 1974. Officers used buildings and vehicles along Fifty-Fourth Street for cover. Weapon fire was erupting from the small house. The officers learned there were four hundred officers at the scene. Nine thousand rounds of ammo were fired between the suspects and the police. Many officers ran out of ammunition in the first few minutes of the fight. The gunfight continued for two hours.”

Published by Fulton Books, John Bowermaster’s book is a stirring account that brings a fascinating life into picture throughout narratives of a soldier’s journey battling his way throughout 60s-70s warfare.

Readers, young and old, will experience a thrilling and dangerous adventure in these pages.

Readers who wish to experience this riveting work can purchase “An LA Cop: From The Jungles Of Vietnam To The Streets Of Hollywood” at bookstores everywhere, or online at the Apple iTunes Store, Amazon, Google Play or Barnes & Noble.

"An LA Cop: From the Jungles of Vietnam to the Streets of Hollyw, Fulton Books, John Bowermaster