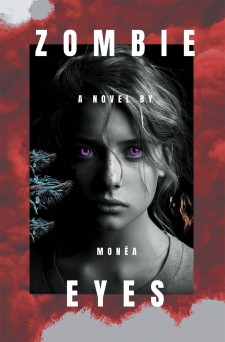 NEW YORK, September 15, 2020 (Newswire.com) - Monea, a passionate writer with a wild imagination, has completed her most recent book “Zombie Eyes”: an enthralling book about a villainous unnamed woman without a memory who is thrust in a complex circumstance of searching for lost people as well as herself.

Monea writes, “Our main character, who sees herself as more of a villain rather than a good-hearted citizen, has no name, hence why she’s addressed as NoName. She has no family, at least none that her memory-absent mind can remember. She’d say she’s completely alone because the sarcastic asshole in her head doesn’t count, regardless of how many times he’s told her that he’s an actual person. The only thing she knows for certain is that the world is over, and the stupid, groaning, brain-dead corpses are responsible for that.

"Just when NoName thinks she’s got a grasp on her confusing life, the world throws more complications her way. Enter Bunny and Scotty Moore—odd names but not as odd as their personalities. Scotty, a seventeen-year-old smartass whose mouth never comes to a halt, somehow worms his way under NoName’s cold exterior and gets her to warm up to them. Bunny, on the other hand, possesses a wisdom way beyond that of a twelve-year-old girl. Her innocence and naïve outlook of the world and people somehow manage to turn NoName’s negative perspective of herself. When the siblings blackmail NoName to help them find their long-lost brother with little to no hints of where he’s gone, can she help the siblings and perhaps even (as cliché as it sounds) find herself in the process?”

Published by Fulton Books, Monea’s book follows a confused protagonist in a quest for purpose and rediscovering herself despite the overwhelming problems that haunt her life.

This book depicts the riveting moments of a woman in crisis who meets an unlikely opportunity to uplift herself in the form of two extraordinary people with an enigmatic background.

Readers who wish to experience this mesmerizing work can purchase “Zombie Eyes” at bookstores everywhere or online at the Apple iTunes Store, Amazon, Google Play, or Barnes & Noble.