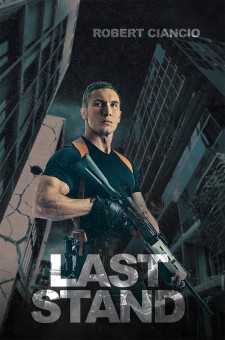 NANTY GLO, Pa., June 30, 2020 (Newswire.com) - Robert Ciancio, a twenty-five-year police veteran who has worked in both suburban and metropolitan areas, has completed his most recent book “Last Stand”:  a gripping and potent novel that follows Army veteran Buck who finds himself in the middle of a shocking disaster that envelops the world wherein he has no choice but to face life and death situations.

Robert writes, “Buck is an Army veteran and police officer working in the metropolitan DC area. He is at his wits' end.  He hates his job and needs a break. As he is preparing to start a much-needed two-week vacation, he wakes up to find that his life is about to take a drastic turn. When Buck learns that the electricity has gone out, he discovers that it is not an isolated incident but that the electricity has gone out everywhere. As the days turn into weeks, Buck finds himself surrounded by a community that is not only ill-prepared for a disaster of this magnitude but a community that is desperate enough to go to any level to obtain the things that they need to survive, even if that means killing their own neighbors. Plunged into a new world where his life is quite literally a fight for survival, Buck decides that his chances of living are better in a suburban area. Deciding to escape the volatile, densely populated city, he makes his way to the rural countryside that he once called home. But once there, Buck finds that things aren’t much better.  Thrust into a desperate battle, he learns of a plot by an unexpected enemy to take control of the country he loves. Forced to make life and death decisions, he finds that his choices could not only change his life and the lives of his loved ones, but they could change the course of history as well.”

Published by Fulton Books, Robert Ciancio’s book is a complex and thrilling saga about a sudden chaos that fell as darkness blankets the world and our protagonist is forced into battles that could possibly alter history.

Every reader will definitely be at the edge of their seats as more surprising events take their turns.

Readers who wish to experience this brilliant work can purchase “Last Stand” at bookstores everywhere, or online at the Apple iTunes store, Amazon, Google Play or Barnes and Noble.