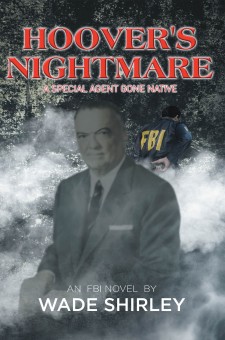 SUGAR CITY, Idaho, June 9, 2020 (Newswire.com) - Wade Shirley, a retired man who was an FBI Special Agent, has completed his most recent book “Hoover’s Nightmare”:  a gripping and potent read that looks into the day-to-day life of a lone FBI agent named Agent McWade as he faces the chaos in the West.

Wade writes, “In creating the world’s premier law enforcement agency, J. Edgar Hoover built a gigantic bureaucratic machine resembling a slow-moving freight train, which was kept on his undeviating track by volumes of manuals containing rules and regulations beyond imagination. Each car of this lumbering snakelike apparatus had a function, but fastened loosely to the rear was a lonely straggling caboose known as the One-man Resident Agent. Hoover and his sycophants in the corner offices on Pennsylvania Avenue hated the concept of the one-man office and looked at them as necessary evils. They were needed to get the work done but hated as they were too far removed to be effectively micromanaged, and as they were out of sight, they were wrongly assumed to be screwing off.

"Hoover’s Nightmare: A Special Agent Gone Native is like no other book ever written from within the ranks of the FBI. Penned as a novel to allow the author flexibility, the reader is taken on an exciting, informative, dramatic, and often humorous journey through a part of U.S. history that is, unfortunately, rapidly being swallowed up and lost down the memory hole of time. As the reader travels with the main character, Agent McWade, he will experience Indian wars, crazy kidnapping scenarios, Behavioral Science Unit experiences, unimaginable sex crimes, heart-wrenching tragedy, and a host of other unparalleled real-life cases. All this through the eyes of the agent who became Hoover’s nightmare. Read and enjoy the book that took the FBI well over a year to approve and allow to be published.”

Published by Fulton Books, Wade Shirley’s book is an exciting fiction that carries a complex and action-packed tale across the missions of an FBI Agent. Readers will definitely find this creation interesting and thrilling.

Readers who wish to experience this fascinating work can purchase “Hoover’s Nightmare” at bookstores everywhere, or online at the Apple iTunes Store, Amazon, Google Play or Barnes & Noble.

Please direct all media inquiries to Gregory Reeves via email at gregory@fultonbooks.com or via telephone at 877-210-0816.'